You might not expect to come upon a castle while visiting Spokane, but that is exactly what you will do if you visit the Spokane County courthouse. Most of us associate such architecture with romantic old castles in Europe, or perhaps something out of the world of Walt Disney or fairy tales. To find such a building in the center of a modern, growing regional hub city such as Spokane is a bit startling. How did this come about? You'd expect such a building must have a colorful past, and our courthouse does not disappoint!


When the first ground was broken in the fall of 1893, Spokane was still a boom-town that had been suffering from the financial panic of 1893. The project itself was designed in part as a stimulant for a faltering economy in those hard times. At first, there was some bitterness from the initial decision to place the structure on the north bank of the Spokane River. Downtown business owners had hoped to keep the building in the central business district. Residents from the southern and western parts of the county lobbied the county commissioners to select a more rural location. One man even told the Board that if they put the courthouse in Spokane, then those outlying parts would secede and form a new county. There was also harsh criticism that the building itself was an extravagant waste of public funds.

But the full story of the courthouse began almost a decade earlier when in 1887, colonel D.P. Jenkins donated the land and $1,000 for the construction of the new county courthouse. But it was not until 1893, when leaky roofs and other problems of the old courthouse became painfully apparent, that the Board of County Commissioners decided to act on Jenkins' offer.

On June 7, 1893, the Board officially opened the design competition for the new structure of "brick and stone or stone as near fireproof as practical to include commodious vaults for records, plumbing, heating, sewerage, closets, and everything necessary for the courthouse and jail to cost no more than $250,000." A prize would be awarded for the most original plan! Prizes were awarded as follows: Winning design 5% of the cost of construction, second prize $500, third prize $300, fourth prize $200.

The architect who submitted the winning design for the courthouse was W A. Ritchie, then just 29 years old. He never attended a formal school of architecture, having received his initial training from a correspondence course conducted by the superintendent of architecture in the U.S. Treasury Department. Before moving to Spokane, he designed and supervised the construction of public buildings and courthouses in Seattle, Bellingham, Port Townsend, Vancouver and Olympia. He had arrived in Spokane just the year prior to winning the courthouse design competition. Kirtland Cutter, the renowned Spokane architect who designed the Monroe Street Bridge, took second place in the competition.

On August 4, 1893, Mr. Ritchie submitted his detailed drawings for the new courthouse and the Board of County Commissioners ordered that notice to contractors be advertised in the Spokane newspapers, giving details of the plans of Mr. Ritchie. From Oct 25th to October 28th, 1893, the commissioners studied submitted bids and finally ordered the contract to be awarded to David B. Fotheringham, and John Keenan was appointed superintendent of construction. Construction began in October 1893, but the building really began to go up the following spring. The brick was manufactured locally by Washington Brick and Lime Manufacturing Company of Spokane. The roof was made from imported slate shingles.

Work was suspended on the courthouse in March 1895 as a quarrel broke out between Ritchie and the superintendent of construction. The commissioners asked Ritchie to resign, he refused, and a grand jury investigated charges of 'Fraud and Swindling" in connection with the courthouse. The jurors concluded: "We have sifted these charges thoroughly, find them untrue, malicious and wicked, having been made by parties who must have known differently, and made for the purpose of misleading the people generally, and this surely and particular. Hard times, prejudice and disappointment must have been at the root of the matter. We find the courthouse to be one of the most substantial and well-built offices in this or any other state, and built in accordance with the plans and specifications, excepting changes that were duly authorized. We find no evidence of boodle or corruption and we believe there has been none." The courthouse was finally completed in November 1895. All county officials had moved into quarters in the new courthouse by November 20, 1895

A Castle in Spokane

The courthouse is said to closely resemble two famous 16th century chateaux in the Loire Valley of France, the Chateau de Chambord, built in 1519 and the Chateau d'Azay Le Rideau built in 1516. Many architects through the years have commented on the masterly replica of a 16th century French Renaissance design, its fine lines of style and proportion with regard to the towers and turrets, the sculpture, iron and brickwork which excel in pattern and craftsmanship. Detailed exterior trim such as shell patterns with wreaths and festoons and decorative arches are a few of the outstanding features of its design. The beautiful center tower, now lighted at night, is a masterpiece of detail in itself.

A New Jail Next to the Courthouse


Adjacent to the Courthouse was the new jail. The first man booked into the jail was a James Kershaw on a charge of grand larceny. The last entry under his name reads, "Disposition of case - escaped." Hangings were held in the courtyard between the jail and the Courthouse. The most famous case involved George Webster in 1899. More than 300 invitations, bordered in rope, tied in a hangman's noose and bearing a picture of Webster, were sent out.

The courthouse was also the scene of at least one violent episode a year after it opened. On August 1, 1896, Lou H. Plattor, an attorney and politician, was shot by Henry Siefert in the second floor corridor outside a courtroom. Newspaper accounts give a sketchy picture of what actually happened. But Siefert was apparently angered by what he thought were derogatory remarks about his character by Plattor, who also apparently struck Siefert with a cane. Siefert then, out of retaliation or self-defense, pulled his gun from his jacket and shot Plattor dead. Siefert was charged with murder, but the jury acquitted him.


In 1897, another scandal erupted when a news article reported that county employees were actually living in the courthouse, using it as a hotel for their families. According to the article: "There are times and places when the odor of boiled cabbage and other delicate edibles is not offensive. In a courthouse, however, almost at any time, such odors are hardly keeping with the surroundings." Soon after the article appeared, the county commissioners dealt with the problem. A later article reported: "The odor of fried onions, sauerkraut, oysters and mushrooms was less pronounced than heretofore, and the prospect is that the county will not hereafter engage extensively in the hotel business."


Remodeling has been done over the years to meet the growing needs of the county. In 1953, the old Public Health Building on the northwest corner of the courthouse block was razed to clear the way for the present four-story courthouse annex. It was hoped that the annex would take care of the county's needs for the next ten years. The first floor was assigned to the Sheriff's department, the second floor went to the three justices of the peace, the third floor to the county prosecutor, and the fourth floor was unassigned for the time being with no immediate plans. At that time, the courthouse also housed many other departments as well, including Planning, Engineering and Parks and Recreation.


Spokane County takes pride in its 'castle' showcase building. Improvements and renovations have occurred over the years to 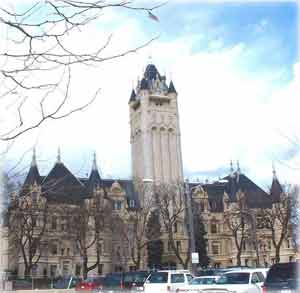 improve both the functionality and efficiency of the building. Windows were replaced recently, which has greatly improved the energy efficiency of the building. At that same time, the outside brickwork was cleaned and re-sealed. The Courthouse is surrounded by manicured lawns, shrubs and trees, wonderfully framing this beautiful historic treasure!

The project was extremely difficult with the scaffolding needing to go around the entire tower roof but not touch any of the roof. There were areas of the tower that had not been seen or touched since the tower was built, and there were 100 year old construction techniques that had to be learned to assure the repairs were made properly.

Total cost was about $2,000,000 with 50% of the money coming from a state grant from the Department of Archeology and Historic Preservation. The goal was to make sure the tower would not need any work for another 100 years. The US Flag was returned to the tower on January 16, 2009 along with a new POW/MIA flag.
ONLINE SERVICES
View Available Services
FIND US
County Department Locations
MAPS & GIS
Available Mapping Services
ARP PROGAM
Fiscal Recovery Funds
EMPLOYMENT
Opportunities & Careers
LABOR ORGANIZATIONS
Contracts and Negotiation Updates
[]