The Hawthorne West project is a stormwater retrofit and road improvement project which proposes to provide water quality treatment in an area where none currently exists, provide pedestrian safety features, traffic calming and road resurfacing. The project proposes to perform these improvements on Hawthorne Road, which bisects the 200 acre Whitworth University campus, between Waikiki Road and Division Street / U.S. 395, in north Spokane in S18, T26N, R43, EWM.

The segment of Hawthorne Road that would be affected by this project is approximately 0.6 miles in length and is designated an Urban Minor arterial Road per the Spokane County Road system. It has an Average Daily Traffic (ADT) count of 6271 in front of the college, increasing to 10,397 between Whitworth Drive and Division Street / U.S. 395. Hawthorne Road, between Waikiki Road and Whitworth Drive, was constructed in 1978, and between Whitworth Drive and U.S. 395 in 1972. It most recently received a 2-inch ACP inlay in 1995.

Spokane County Public Works applied for, and received, grant funding from the Transportation Improvement Board (TIB) for a full-depth grind and asphalt inlay with an 8-inch cement treated base on Hawthorne Road. The road portion of the project will also narrow the lanes, changing the road shape from linear to one that meanders between new elevated landscaped islands and curbside bio-retention swales. This lane reconfiguration is proposed in order to create a traffic-calming effect, and will also include buffered bike lanes on both sides of the road. Safety improvements are planned, such as new crosswalks enhanced by restricted left turn lanes and adding raised refuge islands. View the Engineering and Roads project page.


Spokane County Stormwater Utility applied for, and received, a 75/25 match grant funding from Washington State Department of Ecology (DOE) for the implementation of stormwater treatment facilities. The method of water quality treatment proposed for the project is bio-retention swales. The swales would be constructed within the existing road right-of-way, actually within the existing road prism (between curb-lines), with very little expected disturbance to the adjacent sidewalk and curbing. Swales will be constructed on both sides of the road, alternating from side to side, following the proposed meandering realignment of Hawthorne Road. When complete, the stormwater retrofit portion of this project will provide water quality treatment at 100% of today's new / re-development criteria. Existing drywells will be abandoned and replaced with new double-depth (Spokane County Type B) drywells. The drainage area has been re-evaluated and the number of drywells necessary for disposal of stormwater runoff is less than existing, reducing the potential impact to the aquifer due to fewer underground injection control facilities.

All of the drywells within this section of roadway were identified as a priority for retrofit in Spokane County. 15 of the 18 drywells in the project area are within the top 600 (of approximately 2000) in the most critical need of retrofit. This prioritization was determined by a recent Ecology funded ranking and prioritization of all underground injection control facilities within Spokane County's stormwater structure inventory.

This project is located over the Spokane Valley-Rathdrum Prairie (SVRP) Aquifer which is designated as a Sole Source Aquifer by the Environmental Protection Agency and is the drinking water source for over 500,000 people. The project is situated in an area where the vadose zone treatment capacity (per UIC Guidelines) is categorized as either "LOW" or "NONE." The project is also situated over "MODERATE" and "HIGH" Critical Aquifer Recharge Areas, indicating that the aquifer is very susceptible to pollutant contamination in this area, elevating the need to retrofit the existing drywells in this location.

Funding for the stormwater aspects of this project will come from Stormwater fees that have already been collected, along with Washington State Department of Ecology grant funds.  The cost estimate for this project is in the range of $600,000.00.


To access the Engineering and Roads site relative to this project, view the project page. 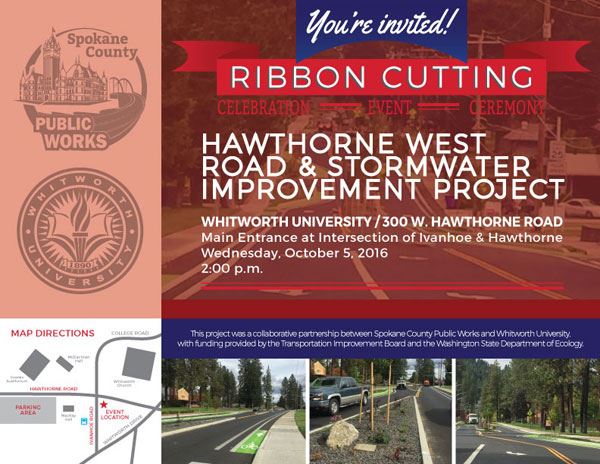