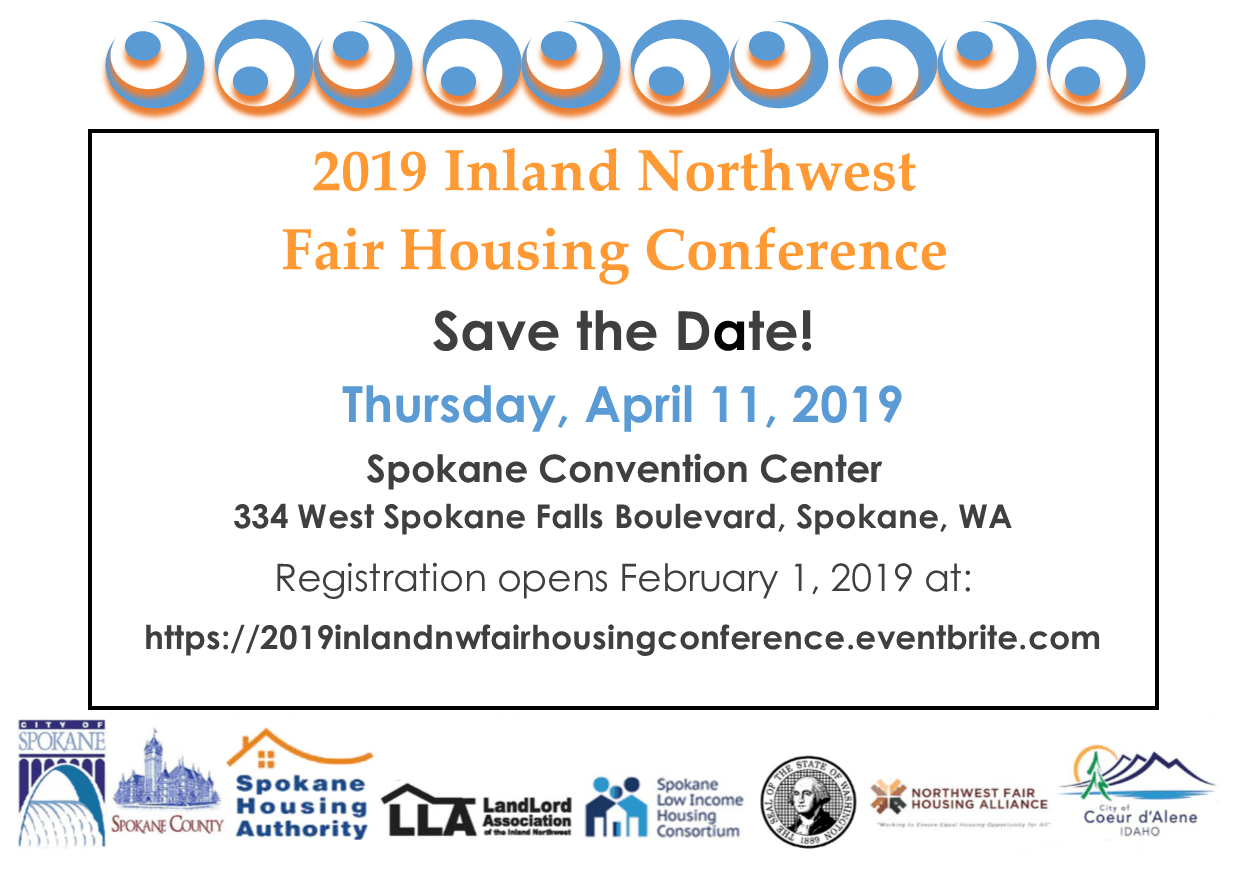 Click link below for Power Point Presentations and Handouts
https://my.spokanecity.org/news/stories/2018/04/03/2018-inland-northwest-fair-housing-conference/

As part of the jurisdiction's obligation to affirmatively further fair housing, the jurisdiction must undertake the completion of an Analysis (PDF) of the Impediments to Fair Housing Choice as well as a Fair Housing Plan. This document summarized both the analysis completed by the County as well as the strategies developed to address the barriers to housing choice.

HUD has included a wide array of potential issues under the umbrella of "impediments to fair housing choice." An impediment restricts housing choice for persons who are part of a federally protected classification.

HUD defines an impediment to fair housing choice as any action, omission or decision in a jurisdiction:


As a recipient of CDBG and HOME Funds, Spokane County is required to develop programs that will “affirmatively further fair housing.” HUD, which allocates these and other funds, requires grant recipients to examine the local housing market and identify barriers to fair housing choice, and implement a plan to address any identified housing barriers for protected classes. The Analysis of Impediments (AI) and Fair Housing Plan for Spokane County were updated in September 2018, with Resolution # 18-0680. The AI addresses impediments discovered between 2003 and 2008. Spokane Housing Authority, the City of Spokane, and Spokane County began discussions on a regional AFFH based on the new fair housing rule. HUD rescinded the rule and extended the deadline for AFFH submission. As a result, the current AI was reviewed and renewed while we await further direction from HUD. No new impediments have been identified in Spokane County.


An individual who believes they have been discriminated against may file a complaint with HUD Office of Fair Housing and Equal Opportunity (OFHEO), Washington State Human Rights Commission (WSHRC) or Northwest Fair Housing Alliance (NWFHA). All of which are located in the city of Spokane’s downtown area. These agencies work together to track the status of complaints thereby eliminating duplication in reporting. Identifiers in the complaint data within this report have been removed after comparison of the lists provided by HUD and WSHRC.

Once a complaint is filed with one of these entities, the parties are encouraged to resolve the complaint by participating in negotiations designed to reach resolution and to protect the public’s interest. Nationally, and at the state level, a high percentage of complaints are closed by conciliation or predetermination settlement. If conciliation cannot be achieved there is a finding to determine if evidence of reasonable cause exists to support a violation of fair housing law. Some complaints will be closed with a “no cause” determination due to insufficient evidence to support a reasonable cause finding. If reasonable cause exists to support an allegation of housing discrimination, the case may be given an administrative hearing or be heard in superior or federal court.


According to the information compiled, 43 fair housing complaints were filed by Spokane County residents during 2003-2008. Of those, 17 were dismissed for no cause, 1 was withdrawn by the complainant; 1 complainant failed to cooperate, 5 were withdrawn for no benefit, 9 ended in conciliation and settlement, 1 was withdrawn with settlement, 4 are pending, and 5 resulted in pre-finding settlement (PFS) agreements.

No complaints were reported related to real estate transactions for home buyers.


The highest number of complaints is related to discrimination of disabled individuals in the area of reasonable accommodation. Those who filed complaints and then subsequently withdrew them offer some insight into areas Spokane County may want to focus on with education and outreach. For at least 5 complainants, no remedy would offer a benefit to them, so they dropped the complaint. This doesn’t mean the complaint was invalid. For example, if discrimination occurs in advertising and it is reported, the individual reporting the discrimination may not want to live in a home after being discriminated against, but still wants that landlord to follow the law.


The challenge will always be to make sure that everyone knows they have choices when determining where to set up a household. Fair housing posters have been produced in multiple languages and are provided to all Spokane County subrecipients to post in their location. Education remains the best tool we have in Spokane County for furthering fair housing and fair housing awareness.